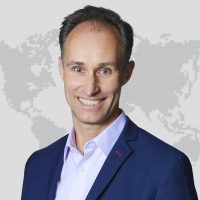 Christoph Papenfuss serves as Member of the Executive Board. He is responsible for the team that brings the expertise of msg global solutions to its client companies and prospects.

Christoph brings to msg global over 20 years of experience in management consulting and software sales with a functional focus on Business Analytics, Big Data, Systems Implementations and IoT. The native of Munich, Germany, is well versed in the North American market, having moved to the San Francisco Bay Area in 1998 after graduating from the University of Passau in Germany.

After working in KPMG Consulting’s High Tech practice for over five years, Christoph joined Cognos, a developer of business analytics software where he built and managed the US West Coast professional services practice. After IBM acquired Cognos in 2008, Christoph moved back to Munich to establish and manage the IBM Cognos Innovation Center in Europe and the Middle East.

In 2015 Christoph joined OSIsoft, which furnishes real-time sensor data management to businesses worldwide, as the leader of the central European team. Besides managing and growing sales, Christoph was also instrumental in developing various key OEM and reselling agreements with companies such as SAP, Siemens and Kongsberg Maritime.

Christoph is married and the father of twin boys. Besides traveling and hiking with his family, he enjoys road bicycling, distance running and photography. View some of his photos at www.sftwins.com.